I've been giving my almost 11 month old daughter Nestle NAN1 pro formula milk since she was about 2-3 months old. It was a new product just out in the market when my family doctor suggested that i let my baby try it since she was colicky.

Well, it was absolutely difficult to find at that time because it was very new and my parents and i went to various places from Jusco to Gardian to Tesco......almost about everywhere and couldn't find it. Untill i finally found them at Cold Storage. It was about RM55.99. The reason why this milk is recommended is because it contains Bifidus, which is a kind of good bacteria that my baby needs. According to my doctor, she might lack good bacteria because she was a cesarean baby.

Well, i must say that after changing to this milk, I notice that my baby became less and less colicky. Compared to some other milk that i have tested before, NAN1pro does not produce alot of bubbles even after vigorous shaking. It was very effective in reducing my baby's gas problem.

Later on there NAN1pro became more common and available in the market, though still uncomparable to others, it is however available at major hypermarts. I use to buy them from Tesco at RM50.90 (cheapest so far) but since couple months ago, they increased the price to RM59 something!! whoaaa......
I now get my regular supply from Speedmart99 at RM51.85.

Recently Nestle NAN 1 pro came out with boxpack instead of the tin ones. And so i thought it was cheaper so i bought 2 boxes to try. Almost immediately i knew it was different! The texture of the milk powder is different. And most importantly, after making the milk, it produces ALOT of bubbles even after just a little shake.

I was not happy with that because i was quite worried about Melamine or things like that. Thus, a phonecall to the Nestle customer service made me discover that the boxpack is actually produced in Phillipines while the Tin is manufactured in Netherlands. Therefore there is a slight difference, however they assured me that it is fully safe for baby's consumption. But....i think i'll stick to the tin since after calculation, it is not cheaper afterall. Just about the same.

I thought this piece of information might be useful for mothers. So there........below are some pictures that you can see the comparison of the bubbles and non bubbles. 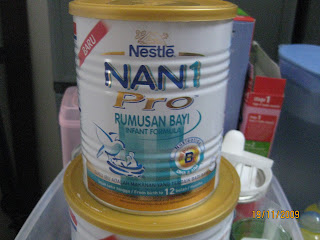 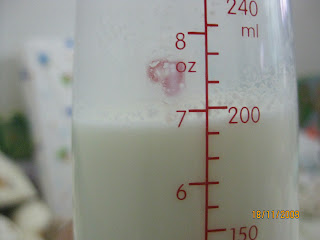 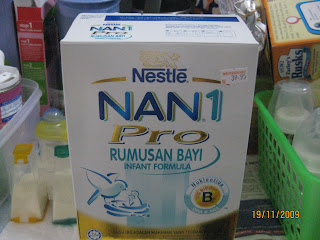 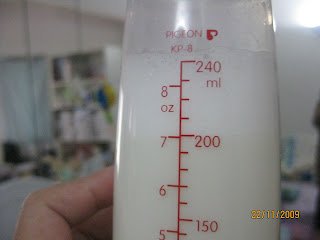 nice blog. very informative. i think RM 51.85 is quite sensible.

very helpful information. i did not realized the bubble and texture but my newborn seems to have this non suitable with the Nan 1 Pro in box. maybe i'll switch to Nan 1 Pro in cans. and my husband just informed me that a chinesse medicine shop in Dengkil sells Nan 1 Pro at RM41.50!! Not sure in box or cans... good price huh!??!

Help.... What's the difference between Nan Pro 1 and Nan pro 1 Gold?
I've been using Nan Pro 1 but i read the label, it doesn't have any omega 3 & 6? I can't seem to find any information on the net. Mostly on the net are Nan Pro 1 Gold.

Thank you for this write out. my newborn takes NanPro 1 as well. Now I will go and checkout in chinese medicine shop if it's cheaper at my place. And also to keep to the tin ones. Thanks !

Chinese medical halls are definately much cheaper. I get mine in a box of 700g at RM39.90, cheapest so far but always out of stock. 400g tin price is RM21.50 only, cheaper than box per gram!

Quite surprise with the price since at the can itself stated RM17.50 for can of 400g but way too high of increment of RM 4 per can. Duh.. way making money is that easy.. suppose the supermarket be more cheaper, instead pressing out the pouch out of us.. huhuhu..reality hurts. Good milk with reasonable price but bad on reselling.

is it now no any tin selling in market?i search many place sell box packing only